She seemed destined for greatness when Laura’s parents traded their washer and dryer for ponies for Laura and her sisters to ride. But, this Olympic Bronze Medalist nearly gave up her dream of becoming a dressage rider after several frustrating years of what she perceived as a lack of progress with her horse, Verdades. She was taking a break from the show ring and had become a hair stylist when she thought about giving it another try.

Diddy is fearful of most things from fly spray to plastic bags. He hates surprises. But that also means that he’s extremely reactive, which is helpful during training. After 4 years with Diddy, Laura tried to sell the quirky gelding, but there were no riders that could work with him. He trusts Laura like no one else. In fact less than 5 people have ridden him ever. That’s when after taking a break, Laura decided to give dressage a serious go. She moved to Florida with Diddy and seriously pursued training under Debbie Mcdonald. Since then the pair have qualified for the World Equestrian Games, the World Cup of Dressage, and the 2016 Olympics, earning a Team Bronze.

Verdades and Fizau have different supplement needs, so Laura gets all their formulas in Platinum PAKs so they are easy to administer. Each PAK is labeled with the horse’s name. Platinum PAKs are also convenient when traveling to a show.

» Buy all of Laura Graves's formulas here or select individual products below. 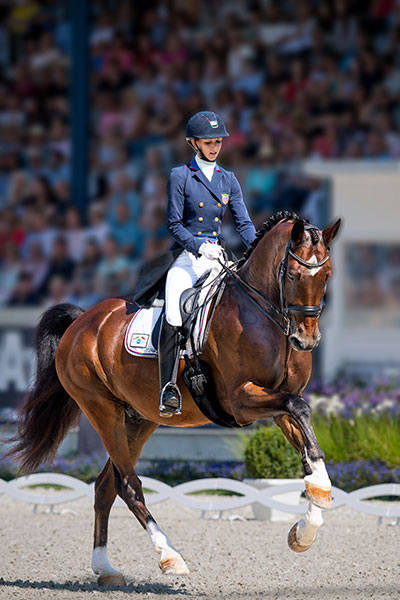