Why I Choose Platinum

"At MC Cutting Horses I ask my horses to perform at a very high level. They give me everything they can and I want them to feel good inside and out. Giving them Platinum helps them work hard, perform their best and recover well. The longevity and future of these horses is what’s most important to me, my sport and my business. That's why I use Platinum."

Morgan was born and raised in Valencia, California. Her relationship with horses began at a very early age under the guidance of her mother, Patricia Cromer, an accomplished hunter-jumper rider. Morgan began showing ponies at the age of 4 and continued to show English horses until a family friend first introduced her to the world of cutting when she was 10 years old. From there, she never looked back.

As a girl, Morgan spent her summers working for cutting horse trainers Russ Westfall and Scott Weis. Upon completing high school Morgan went straight back to the Westfall Ranch in Los Olivos, CA to work full-time for cutting horse trainer Russ Westfall. She would go on to spend 6 years working for the Westfalls, all the while honing her horsemanship skills.

Her dedication to the sport of cutting culminated in her first futurity win at the age of 22. In 2007 Morgan made the bold decision to strike out on her own and realize a dream that began as a young girl. Since then her success has been undeniable.

Before she reached her 30th birthday Morgan was inducted into the National Cutting Horse Association Hall of Fame, crossing the $1 million dollar mark in career earnings. She is only the fourth woman in history to accomplish this feat. In 2014 Morgan had another breakout year, adding another $300,000 to her career earnings. Morgan’s success is rooted not only in her unwavering work ethic, but also in her loyalty to her clients and most importantly, her love of horses. 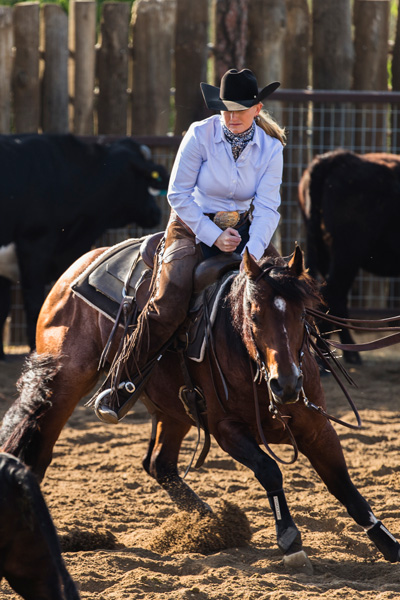