Rae-Dawn Arabians:
The Pursuit of Happiness

The Arabian horse is a majestic and intelligent creature with a dusting of fiery independence. With poetic movement, their finely-chiseled bones, quintessential dished face and high, billowy tail call to mind something special and timeless, like a beloved piece of Christmas china or wedding pearls. But this historic breed also offers a classic juxtaposition of grit, versatility and industriousness. Brave and fast, they were originally bred as war horses in the Arabian Peninsula and ancient Mesopotamia. Their near-divine characteristics have carved them into several Arabic myths and legends. It is easy to understand how these magnificent animals have captivated the imaginations of poets, painters, authors and film producers. The same fascination enveloped now-famed breeders Murray and Shirley Popplewell over two decades ago when they were swept away by the exceptional beauty and captivating aura of the Arabian.

Recent empty nesters, Murray and Shirley had the simplest of aspirations. They were looking for two horses that would afford them the opportunity to enjoy the trails together in their hometown of Saskatoon, Canada. Unbeknownst to them, their new hobby would carry them into a different world, all beginning with the innocuous purchase of their first Arabians from a local newspaper ad. Murray recalls, “We started looking in the paper for horses for sale. It didn’t matter what breed, but when we started looking the one that appealed to us was the Arabian. I bought a purebred Arabian, and Shirley bought a half-Arabian, half-Quarter Horse.” The horses proved to fit perfectly and created the freedom and time on the trails together that Murray and Shirley had sought. That original dream proved to last no more than a month, when with a trip to the local tack store Murray was invited by the owner to see his Arabian show horses. Accompanied by Shirley, they agreed to the invitation, completely unaware that it would change the course of their lives. “We went out there, and he happened to have a mare in foal for sale, so we bought her and she foaled out in a week,” Murray remembers. Shirley kept going with the purchase of a gelding and the couple was, within a few months, entrenched in the world of Arabians. “We were knee deep pretty quick,” Murray says laughing. “The first foal that was born, we made him a pet, and we enjoyed it so much. Then we started buying other mares and began looking at breeding those mares. Step by step we continued on, and we got a little carried away,” he says with an honest humor. What started as a quest for a new hobby had rapidly turned into a lifestyle for the Popplewells, who are unanimously regarded as leaders in today’s Arabian breeding industry. Their success was perfectly organic, sparked by the enjoyment and love they felt for their two original trail horses, purchased from a newspaper ad and responsible for the start of a breeding legacy. The couple has since dedicated over 20 years to the building of their renowned Arabian breeding and performance empire: Rae-Dawn Arabians.

So-named as a tribute to Murray and Shirley’s two treasured daughters, Amanda Raylene and Juanita Dawn, Rae-Dawn Arabians is known around the world for producing horses with a striking combination of beauty, athleticism, trainability and a kind disposition. With two stunning locations, the original farm in Saskatoon is home to the broodmares, foals and weanlings with expansive acreage for daily turnout and grazing. The southern Scottsdale, Arizona, location being dedicated to the marketing, training and performance side of the business. It is considered by many to be the jewel of the Scottsdale Arabian horse community. Shirley breaks down the timeline between the two farms saying, “The bred mares go to Canada to foal out. The mares and foals are turned out together in pastures. They can graze all day; their heads are down.” The Popplewells are firm believers that a horse needs the opportunity to live like a horse, especially in its formative months and years. Each pasture is three to five acres and houses three or four mares with their foals together. The foals are often babysat by another mare, all the while learning the herd dynamic. Rae-Dawn babies are handled and halter broke when they are mere days old, so they know nothing different. The team leads them out to pasture in the morning and back in at night. “They are led beside their mom, and learn respect for the halter and herd atmosphere, so that when they are done with their show career they are familiar with that and not scared of it,” explains Shirley. “They get to grow up as a real horse would if it was just let be. Then they are weaned and turned out together as weanlings once they are separated from their mothers.” An important milestone that takes weanlings from their pasture play to their future careers is seen each August, when Rae-Dawn trainers travel from Scottsdale north to Canada for a show. “That’s when they take a serious look at the babies, and we pick who we think is going to have the best chance as a halter horse,” says Shirley. “They’re brought down to Scottsdale in the fall and are put into the show barn.” The Popplewells thrive on being hands-on owners. They haul horses back and forth across the country, foal out the mares and manage all aspects of day-to-day horse care but are quick to credit their incredible staff working at both farms for the extensive care provided to their beloved horses. 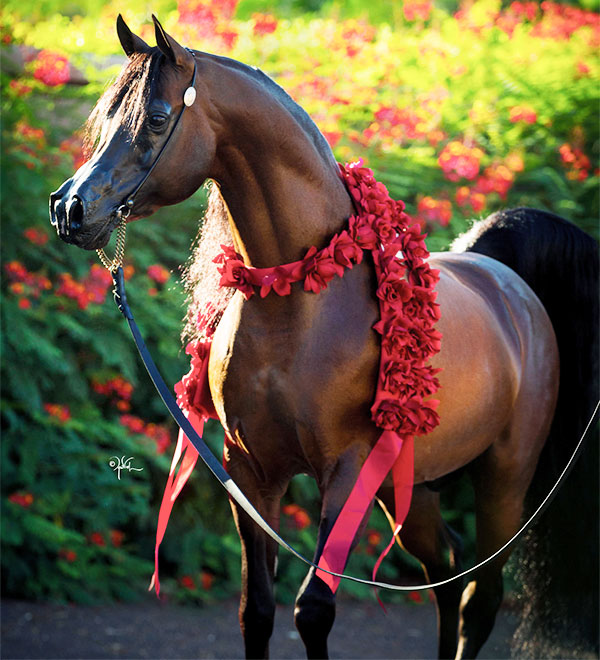 “I enjoy the Arabian horse. They’re a beautiful animal, and the challenge that comes with breeding and the business side of things, the people involved in the industry, that’s really where I enjoy it. I think the Arabian grabs your heart.”
— Murray Popplewell
Rae-Dawn Arabians

With countless national and international championships, both in-hand and under saddle, the Popplewells keep one philosophy at the heart of all of their decisions: producing happy, functional Arabian horses. It is a seemingly straight forward ideology, but one that actually requires endless passion and dedication, relying on systematic discipline, handling and care from a foal’s first breath. Their goal is to consistently offer the industry beautiful, conformationally correct and complete horses that can excel in elite halter competition and can continue on with life after halter in a variety of disciplines. The belief that breeding decisions should never be made based on producing a “specialist”— such as a halter horse or a performance horse, but rather, to produce an Arabian horse that honors the breed’s history as a stunning athlete capable of anything. “When we started breeding, we bred to horses that weren’t really what you would call a ‘halter horse,’ but they had great movement and good body. We started building broodmares to fit that,” says Murray of the program’s early days. “Movement, to Shirley and me at the beginning, was a big thing. We focused on movement of the horse, more than pretty or maybe some of the other features that you see in halter horses. We love the way these horses move, that’s what sets them apart.”

Unwavering attention to detail at Rae-Dawn Arabians is felt and seen by each and every one of the 70 plus horses in their care. It is both a science and an art form, choosing which pairs to breed, when to begin training and how to maximize each horse’s potential with a variety of personalities. Shirley attributes their success to treating each horse like an individual and tailoring a program to that specific horse. “We put a lot of emphasis on details,” she says. The details involved with the diet and nutrition portion of Rae-Dawn’s program are no exception. In fact, they consider it of primary importance to optimizing the health of each horse. Shirley expands, “Nutrition is definitely the number one priority. We keep a very consistent program between our two farms. We do use different hays because they’re in different countries, and we do hay analyses periodically to know where it’s at from year to year. It’s important to do them. We use the same feed. We try to keep the same program. The Platinum Performance Equine, Osteon, Balance and Bio-Sponge, we use all of those at both farms. We put the foals right on Platinum Performance Equine and Osteon when they are weaned and eating individually. We’ve examined specific feed in detail: the percentage of protein, fat and fiber. We’ve gone over all of that to select the proper nutrition for these horses, and we adjust the feed according to the work level and the energy output of the individual horse. We’re getting good results. The Platinum products put the shine on the horses from the inside out.” Murray quips, “You know our staff can put a really good shine on the outside of a horse, but we count on Platinum putting it on the inside.” 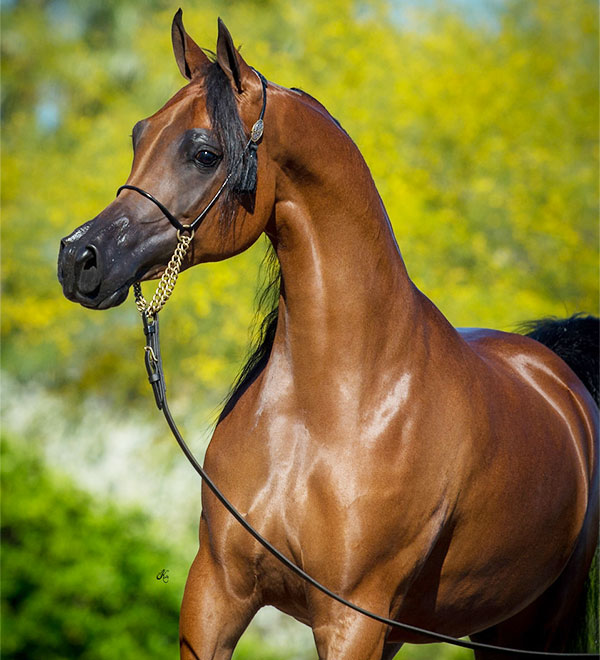 “You know our staff can put a really good shine on the outside of a horse, but we count on Platinum putting it on the inside.”
— Murray Popplewell
Rae-Dawn Arabians

The future continues to be bright for Rae-Dawn Arabians with 15 foals welcomed this year. Trying to choose a favorite aspect of her many roles at Rae-Dawn, Shirley decides, “The foaling is the best. One of the highlights and the excitement is to have a foal. You know you breed something, your imagination has to take you somewhere for 11 months, and then the foal is born. And it’s exciting seeing the change from when they’re so little and then when they’re 8 or 10 months old and we bring them to Scottsdale. That’s the exciting part.” She quickly adds, “But showing is also exciting. Seeing our trainers show the horses is amazing. Murray and I get in the ring with our horses as amateurs. It’s all wonderful. We enjoy every aspect of it.” Murray agrees, “I enjoy the Arabian horse. They’re a beautiful animal, and the challenge that comes with breeding and the business side of things, the people involved in the industry, that’s really where I enjoy it. I think the Arabian grabs your heart. Somebody just told me the other day that we give so much to the Arabians. I said, ‘We don’t give anything. We’re paying back. We just enjoy it!’ ” For the Popplewells, they are living a dream come true and basking in every minute. Their adoration for the horse is contagious, and they eagerly share the joy that their horses have brought them with others. Events are hosted at their facilities throughout the year including open houses and farm tours to welcome enthusiasts of the Arabian horse and introduce new people to the breed.

Their devotion and true love for the horses of Rae-Dawn Arabians is palpable. Shirley sums it up perfectly, “I guess in terms of a legacy, I would want somebody to see a horse and say, ‘That’s a happy, beautiful, athletic horse … that must be one of Rae-Dawn’s horses.’ A happy horse to me is going to do anything. They don’t get a say in any of it, but we can make sure that they are happy. It’s about the horse, it’s not about the ribbon and it’s not about the title or any of that. It’s about the horse.” The horses always come first at Rae-Dawn Arabians, and that makes all the difference.

“I create thee, Oh Arabian. To thy forelock, I bind Victory in battle. On thy back, I set a rich spoil and a Treasure in thy loins. I establish thee as one of the Glories of the Earth…I give thee flight without wings.”
— From Bedouin Legend